Uncategorized
October 11, 2021October 11, 2021 Massachusett Tribe 0 Comments
The Massachusett-Ponkapoag Tribe were greatly honored by the Harvard Club of Boston with an official Land Acknowledgement and the permanent raising of our Tribal Flag outside of their building on Friday, October 8, 2021!
President Matthew Hegarty led the ceremony, which included brief speeches by Dr. Hegarty, Thomas Green – Tribal Vice President, Elizabeth Solomon – Tribal Treasurer, Jeanne Oliver-Foster – Tribal Board of Directors, and Dr. Shelley Lowe – Director of the Indigenous Program at Harvard University, followed by a luncheon. This has been quite an historic year for Native people in our country!!
Content & Images provided by Tribal Council Member Jeannie Anne Foster
The ceremony began inside the club with introductions and 4 short speeches. Speeches were given by the President of the Harvard Club, Matthew Hegarty (the main speaker), followed by Elizabeth Solomon, Jeanne Foster, and the Director of the Indigenous Program at Harvard University, Dr. Shelly Lowe.
Next we went outside to the front entrance of their building, where
Matthew told a story about the land upon which the Harvard Club is built. Then the flag was hoisted to the top of the pole. Tommy spoke about the meaning of each symbol on the flag to the crowd. We took photos under the  flags, waving in the wind.
You can watch the day’s event here. 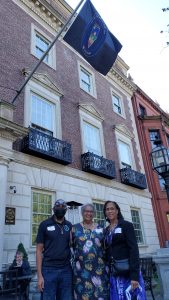