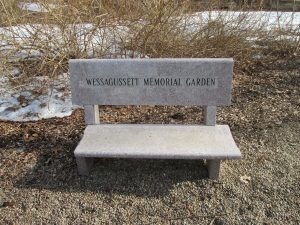 In 1622 the Pocanocket Chieftain, Massasoit, who had befriended the English Colonists at Plymouth the year before and formed an alliance with them, warned Edward Winslow of a conspiracy being undertaken by several tribes to attack a 2nd colony at Wessegusset (Weymouth) and the Plymouth Colony.[1] The attack was to be led by the Massachusett and joined by the Nauset, Paomet, Suconnet, Mattachiest, Agawatwam, and Capawack tribes and tribes from as far away as Martha’s Vineyard) [2] As a result the Plymouth Colony sent Miles Standish with a small army to Wessegusset. Arriving on March 26th of the following spring (1623), Standish invited Massachusett War Chiefs Pecksuit and Wittawamut and several of Chickataubut’s most powerful warriors to a “peaceful summit” [4], ambushed or poisoned them and murdered them. [3] Several of the native villagers at Wessagusset were killed as well. One of the warrior’s head was cut off and displayed on a pole as a warning. [2] Due to the savage attack at Wessagusset, Plymouth’s trade with the Indians was devastated for years. Local tribes which had previously been favorable to Plymouth began to forge bonds with other tribes in defense against the English. Finally evolving into what was later called King Philips War. (5] I doubt we will never know if the conspiracy that Masssasoit reported to Winslow was real or an attempt by Massasoit to rid himself of opposition from the Massachusett by playing on the fears of the Plymouth Colony. We do know that it did not go well for the Massachusett (the Nauset shortly thereafter suffered still another plague thereby quelling their uprising). The new colony at Wessagusset collapsed shortly thereafter.

Chickataubut, his people having been ravaged by the diseases of the genocidal campaign of the English, besieged on all sides; invading tribes from the north, the Plymouth Colony to the south, and the English in their midst at Neponset, fought valiantly to keep his culture and his people intact. He died at Moswetusett Hummuck (Quincy) in 1633 of Smallpox. Before he sickened and died, in a treaty with the English he reserved Ponkapoag for his own people. [6] That is why we, the Massachusett, are still here today.

[4] Allen, Zachariah (10-4-1876) Defense of Rhode Island, System of the Treatment of the Indians, providence Press