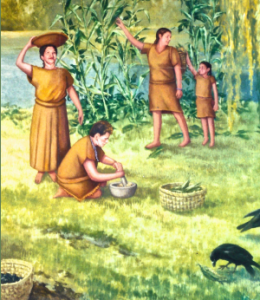 It is important to realize that the Indigenous bands of Massachusett along with the rest of the native population, took their names from the place where they dwelled and not the opposite. The people who dwelled at Neponset (the Neponsets) and forced to move to Ponkapoag, were now called Ponkapoags. The Massachusett Sagamores remained Massachusett Sagamores/Sac’hems and continued their rule over all of the Massachusett Territories. Although the move to Ponkapoag happened under the rule of Kutshamikin, Wampatuck (Josias Chickataubut), son of Chickataubut took up his rule when he came of age. Wampatuck, though raised to observe the religion of the Puritans abandoned the religion as an adult and returned to the indigenous way of life. There is much written of both of these Sagamores and their dealings with the British before and after the move to Ponkapoag. They were not confined to Ponkapoag Plantation, but moved freely about their territories visiting and staying with different bands of the Massachusett and sadly, still warring with tribes’ hostile to the Massachusett.

The women of Ponkapoag were encouraged to learn to weave cloth for their clothing as Puritan women did and to abandon their animal skins, furs and grasses. By the end of the century they would have had to abandon their traditional dress of skins and fur because the English had hunted animals for skins and fur to near extinction. Ponkapoag women wove baskets (decorated with depictions of flowers and animals), house and sleeping mats and brooms all made from grasses and vegetation they gathered from local woods and fields. They sold many of their baskets and brooms to the English, gaining money and respect from the English for their enterprising ways. The men of Ponkapoag were expected to become cultivators of the earth and to practice husbandry. This was a drastic change and role reversal for the men of this community who had just recently been the hunters and protectors of their people. So, began the assimilation of the Massachusett People. The men could still hunt and fish in rivers and ponds at Ponkapoag, in the beginning, but things were changing fast. In 1667, just ten years after the selectmen of Dorchester had “granted” the six thousand acres for the Ponkapoag Plantation, Josias (Wampatuck) Chickataubut requested a deed for the six thousand acres at Ponkapoag. He requested this even though the land at Ponkapoag had never been deeded over to the English. Wompatuck must have realized by then that the only thing the English honored concerning land ownership were deeds. (It is interesting to note that at this time the men assuming authority at Dorchester had themselves received no deed for Dorchester from Wampatuck or any other Massachusett Sac’hem/Sagamore.) A committee from Dorchester came to Ponkapoag, reviewed and renewed the boundaries. They then returned safely to Dorchester along with their friend Ahauton. (more about him later)

Reference: Major Daniel Gookin, A Historical Account of the Doings and Sufferings of the Christian Indians in New England, years, 1675,76,7

The second internment included all of those living at Ponkapoag. It was during what is known as the King Philips War in the year 1675 that the English removed the people at Ponkapoag and delivered them to Deer Island. The Ponkapoag had erected stockade fencing and turned their town at Ponkapoag into a virtual fort in an effort to protect themselves against marauding bands of Philips Warriors and to live apart from those participating in the war against the English. None the less, following orders, a Captain Brattle first tried to remove the people of Ponkapoag to a Dorchester neck of land but the local English inhabitants refused to admit them “so near them”. They were questioned and sent back to their town. It was done “more to satisfy the clamors of the people than any offence committed”. Soon thereafter on October 26th two hundred people of Ponkapoag’s sister town of Natick were removed by boat to Deer Island. Not long afterward the entire population of Ponkapoag brought to Deer Island increased the number of Indigenous Massachusett to five hundred on Deer Island.

Wrote Major Daniel Gookin (an eye witness) “The enmity, jealousy and clamors of some people against them put the magistracy upon a kind of necessity to send them all to the Island; and though it was a great suffering to the Indians to live there yet God brought forth this good by it. First, their preservation from the fury of the (English) people, secondly, the humbling and bettering of the Indians by this sore affliction”. Goookin also wrote that they “lived on clams and shellfish dug at low tide”. That “the Island was bleak and cold, their wigwams poor and mean, their clothes few and thin.” He wrote that “they had a little corn which was fetched from their plantations and conveyed to them little by little” and that “a boatman was appointed to look after them”. By February of this same year some (of the English) brought before the general court a petition requesting that the “Indians” being held at Deer Island be destroyed or shipped out of the country. Others called to mind a treaty with the Massachusett made thirty years before. After reviewing the treaty, and being convinced the “Indians” had done nothing, finally in the spring of 1676 the people of Ponkapoag were removed from the Island and brought to Milton where the sick who were many were cared for by Rev. Eliot and Major Gookin. They were returned to Ponkapoag minus those who had died, later in the year of 1676.

Reference: Major Daniel Gookin, An Historical Account of the Doings and Sufferings of The Christian Indians in New England, years, 1675,76,77